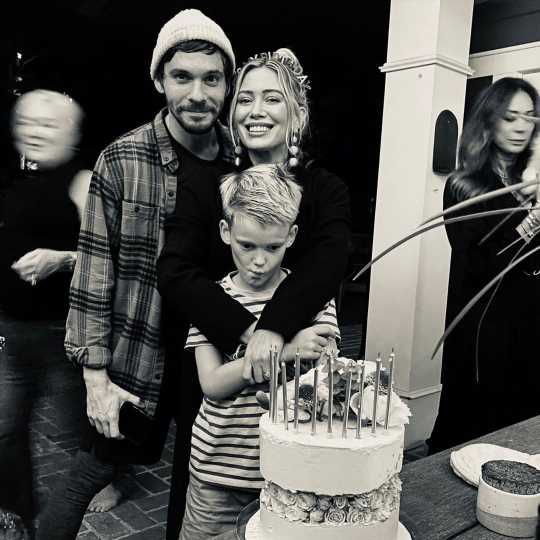 On Monday, Hilary Duff shared an adorable picture with her husband Matthew Koma and son Luca Cruz from her birthday celebration.

In the photo, Luca is hilariously fixated on his mom's cake rather than smiling for the photo. Koma, 33, and Duff pose nicely for the picture while Luca, 8, stands in front of his mom with his eyes centered on the dessert, and his mouth puckered up for the delicious treat.

″One thing on Luca's mind … and it ain't singing me happy birthday,″ Duff teased in the caption of the black-and-white picture.

To commemorate her 33rd birthday, Duff had a two-tiered birthday cake with rose petals in the center layer and additional flowers as a garnish on a top.

The Younger actress rang in her special day alongside family and friends, as seen on her Instagram Story Monday.

Before meeting up with her guests, Duff shared an adorable video of her 22-month-old daughter Banks holding onto a cucumber and teetering around the room.

″Happy birthday to me, huh? Just a little marker on the old countertop," Duff said as she showed her daughter's drawings on the kitchen island. The star also posted several photos and videos from her get-together, which included a foam machine, music, and balloons.

Duff included one clip of Luca — who she shares with ex Mike Comrie — shaking his behind while covered in foam and another of the Lizzie McGuire star swinging her daughter through the soapy scene.

She also shared pictures of herself and her friends sitting down for dinner as they celebrated Duff's birthday with Japanese cuisine.

″We're actually sitting at a table without masks on, we're pretty distanced, pretty separated, there's a breeze, it's worth it for the sushi tonight," Duff said.

Recently, Duff opened up about her experiences as a working mom, which inspired her to write a new children's book about the bravery of little girls.

On Sept. 23, the actress announced that her picture book, My Little Brave Girl, will be published by Random House Books for Young Readers on March 23, 2021. She also plans to release an untitled second picture book in the future. ″I remember coming home from work around midnight, just in time for my daughter's dream feed. I hadn't smelled her all day and it was the first week of a long four months of returning to work,″ Duff told PEOPLE in an exclusive statement.

Duff explained that she got the idea for the picture book that same night and said she "literally wrote it in a note on my phone, having no clue that it would turn into something that would be in the hands of families, sharing the same bittersweet experience."