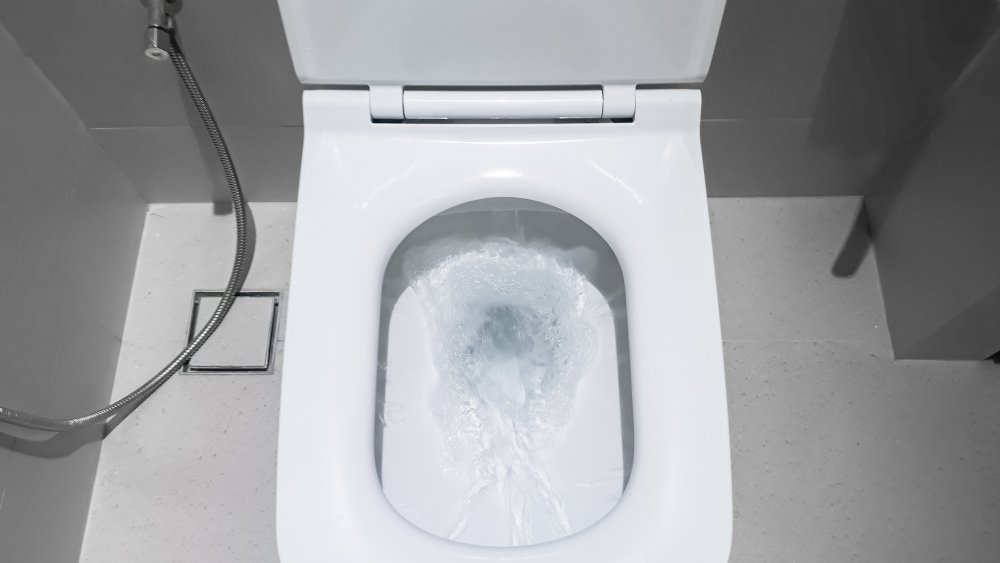 If you’re a germaphobe who leaves the lid up as you’re flushing the toilet, it may be time for you to rethink your life choices. While you may derive a weird satisfaction out of watching things flush down the toilet drain, you are getting more than you bargained for, because scientists warn that it isn’t enough just to flush the toilet to get rid of the stuff you can see — you need to put the lid down to avoid getting sick from the things that aren’t visible. The effect of sending germs into the air with just one flush even has a name: toilet plume.

It was during the 1970s, when a researcher named Charles P. Gerba discovered that a single flush could send a toilet plume filled with tons of bacteria, including e coli, into the air, where it was going strong four to six hours later (via Good Housekeeping). The CDC has named e coli as the culprit for a number of diseases including urinary tract infections, respiratory illnesses, and diarrhea.

Toilet plume can be behind the spread of infectious diseases

In 2013, another study confirmed the grossness. “Research suggests that this toilet plume could play an important role in the transmission of infectious diseases for which the pathogen is shed in feces or vomit,” researchers wrote in the American Journal of Infection Control.

But don’t panic just yet. Although the plume can spread bacteria when you don’t close the lid, and it can land on surfaces like your toothbrush, you’d have to have an open cut for it to enter your body, and potentially do any harm (via Men’s Health). Or, (super-ew alert) you would need to ingest large amounts of bacteria, and that is very unlikely, according to Dr. Janet Hill, a microbiologist who spoke to Today. “The vast majority of microbes in human urine and feces are completely harmless — and actually beneficial,” she reassures, but also cautions, “If you were using a toilet that had also been used by someone with a nasty infection, like, say, they had diarrhea from salmonella or campylobacter infection, then the water might contain a very tiny number of these organisms.”

The last word in toilet flushing

But what if you’re in public and the toilet has no lid? In an interview conducted by Business Insider with New York University microbiologist Philip Tierno, he said these germy toilet plumes can go as high as 15 feet. You’re trapped! No, relax. In this case, Tierno suggests you “exit at the time of the flush” after you do your business. Phew.

This body of research on toilet plumes is especially handy in times of a pandemic, when one virus is responsible for making a great number of people ill. A study by the City University of Hong Kong, presented at the start of the coronavirus pandemic, showed that closing the toilet lid would help keep the virus from spreading. But since polluted particles could still get through gaps between the toilet and the lid, Hong Kong scientists said it was important to keep toilet areas well ventilated to prevent airborne germs from sticking around. Running an exhaust fan for 15 minutes post-flush would also remove any lingering airborne pathogens (via South China Morning Post).