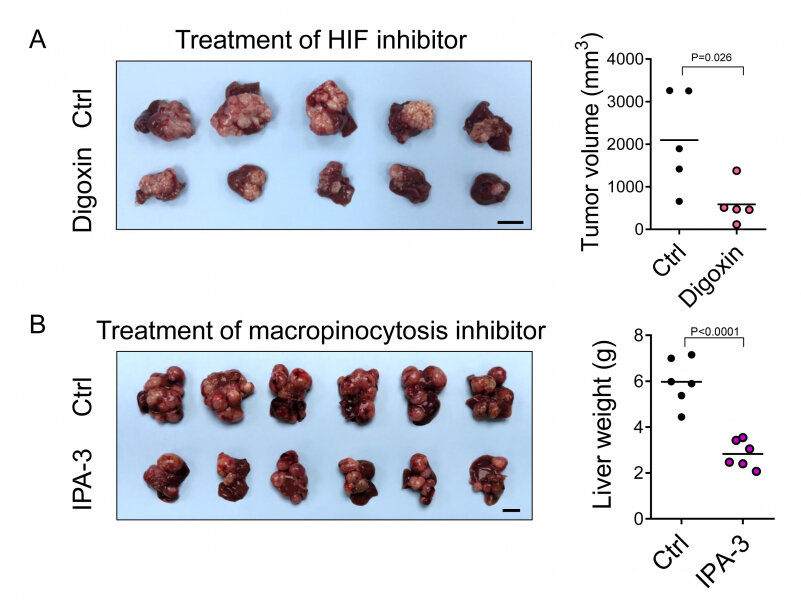 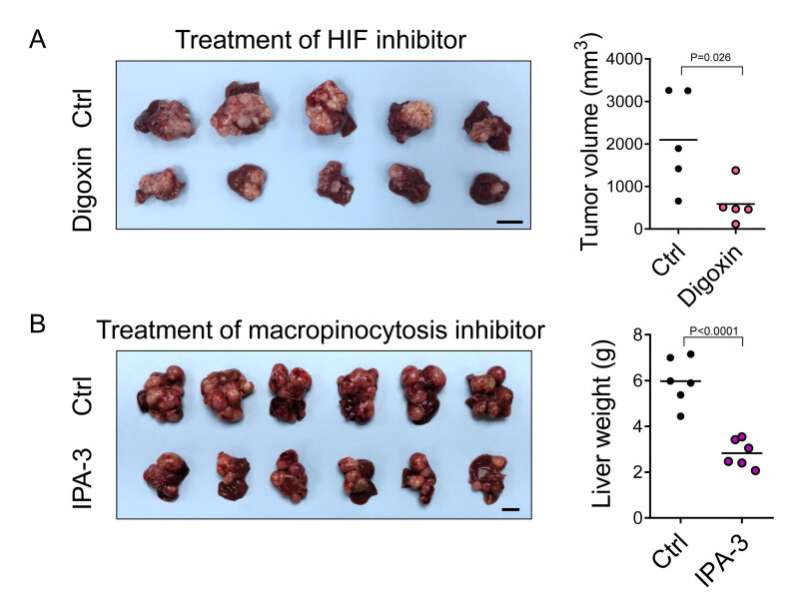 Researchers from the Department of Pathology, School of Clinical Medicine, LKS Faculty of Medicine, The University of Hong Kong (HKUMed) have identified a new metabolic mechanism in liver cancer cells, by which macropinocytosis, an endocytic process, is used to engulf extracellular proteins as fuels to support the unlimited growth of hepatocellular carcinoma (HCC) in hypoxia (oxygen deprivation).

This discovery indicates that targeting macropinocytosis might represent a novel and effective therapeutic approach for HCC. The findings have now been published in Nature Communications.

HCC is the most common form of primary liver cancer. In Hong Kong, HCC is the fifth most common and the third most lethal cancer. Despite the increasing therapeutic options, the median life expectancy of HCC patients in advanced stage is still less than two years.

Blood delivers oxygen, an important nutrient for HCC. However, the oxygen content in solid tumors including HCC is usually lower than normal organs due to the abnormally high growth speed of tumors, far exceeding the growth of blood vessels. HCC cells are resilient to oxygen deprivation as they have high adaptability to this “nutrient stress” through stabilizing a transcription factor called hypoxia-inducible factor-1 (HIF-1).

The HKUMed study has identified a novel gene, EHD2, regulated by HIF-1, which instigates a metabolic program dependent on macropinocytosis to facilitate HCC cells to adapt and proliferate under “nutrient stress.” The study also showed that therapeutically targeting the macropinocytosis pathway could suppress HCC effectively.

Macropinocytosis is an endocytic pathway that allows cells to engulf extracellular proteins. Through confocal microscopy, it was shown that hypoxia could cause HCC cells to exhibit 5–10 folds of induction of macropinocytic level. Through mass spectrometry analysis, the HKUMed team also found that the engulfed proteins were digested and degraded into amino acids which in turn served as fuel to support HCC cell proliferation.

This process was mediated by HIF-1 which transcriptionally activated a novel gene called EH domain-containing protein 2 (EHD2), driving membrane ruffle formation, is the first and critical step in macropinocytosis. Deletion of EHD2 in mice prevented the development of HCC. The treatment of a HIF inhibitor, digoxin, or a macropinocytosis inhibitor—IPA-3, also achieved a more than 50% inhibition of the tumor burden in mouse HCC models.

More importantly, EHD2 was significantly over-expressed by at least two folds in about 40% of HCC patients. Taken together, the study demonstrated that HIF-1/EHD2-mediated macropinocytosis supports HCC growth. The inhibition of macropinocytosis represents a potent therapeutic approach for HCC.

“Liver cancer has poor prognosis, partly because its cancer cells are smart enough to find ways to survive in deprived conditions. Understanding the biology and metabolism of liver cancer is thus fundamental to the identification of effective therapeutic targets and treatments,” said Dr. Carmen Wong Chak-lui, Associate Professor, Department of Pathology, School of Clinical Medicine, HKUMed.