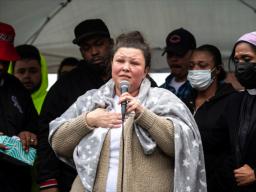 On Tuesday morning Daunte Wright’s parents, Aubrey and Katie Wright, went on ABC’s Good Morning America to share the heartbreaking details of their son’s final moments. Wright was just 20 years old when a Sunday afternoon traffic stop in Brooklyn Center, Minn., abruptly cut his life short, robbing his son of a father and his parents of a son. 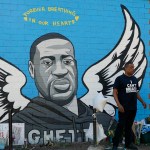 During the interview, Wright’s mother explained to GMA’s Robin Roberts how her son was “an amazing, loving kid” with a big heart, a bright smile, and a love of basketball according to ABC.

“He had a 2-year-old son that’s not going to be able to play basketball with him. He had sisters and brothers that he loved so much,” she said. “He just had his whole life taken away from him. We had our hearts pulled out of our chests. He was my baby.”

Tuesday’s interview wasn’t the first time Wright’s parents spoke of their son’s smile and all the things they’ll miss about him. On Monday night, Wright’s mother addressed a crowd of hundreds of mourners, and shared that she was unsure how she’d manage without her son, according to a report by The Independent.

“I just need everyone to know that he is much more than this. He had a smile that was angelic,” Katie Wright said. “My heart is literally broken in 1,000 pieces. I miss him so much, and it’s only been a day.”

Wright’s aunt was also in attendance at the memorial, and spoke to reporters about what she wanted the world to know about her late nephew. “Just that he was a wonderful person. And he will never be forgotten,” she said.

Losing a child is every parent’s worst nightmare, and it’s one that the Wright’s mother and father are living out on a public stage alongside so many other parents who have had their Black children caught between the crosshairs of systemic racism and bias in America. According to a statement released by Brooklyn Center Police Chief Tim Gannon, Wright was killed when a police officer mistook her gun for her Taser, and fired it into the car at the young man.

“I lost my son, he’s never coming back,” Aubrey Wright said during his GMA interview. “I can’t accept that — a mistake, that doesn’t even sound right. This officer has been on the force for 26 years. I can’t accept that.”

Katie Wright added, “I want to say thank you so much for the support and standing by us, and making sure that my son’s name doesn’t get swept under the rug.”

According to a preliminary report released Monday night by the Hennepin County Medical Examiner, Wright’s cause of death was listed as a “gunshot wound to the chest,” and his death has been ruled a homicide. Civil rights attorney Ben Crump, who has represented George Floyd’s family, among other victims of police violence, is set to hold a news conference with both Floyd’s family and the Wrights on Tuesday.

This story is developing and will be updated as more details are released.