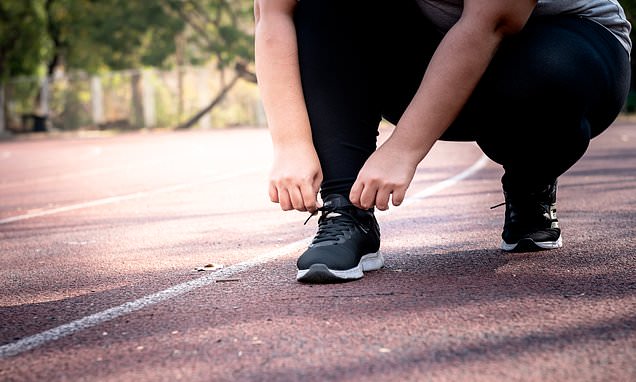 People will get cinema tickets and shopping vouchers as rewards for losing weight under new Government plans to tackle obesity in Britain.

It will encourage them to eat healthier, reduce their portion sizes and increase their daily step count.

In return for improving their lifestyle, they will collect points which can be redeemed for vouchers or discounts on items. 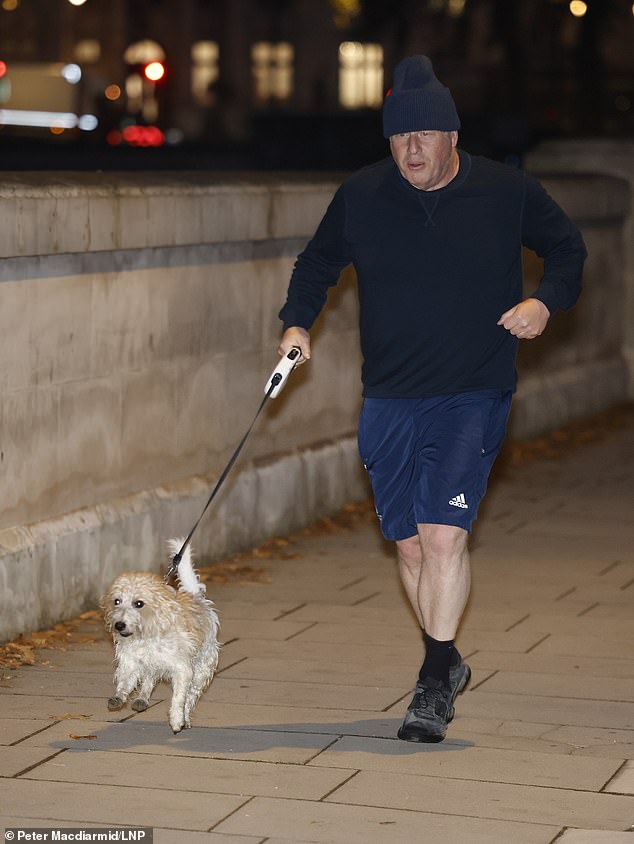 The new scheme is the latest anti-obesity measure flouted by Downing Street. Prime minister Boris Johnson, pictured here out on a run earlier this week, became a convert to ‘nanny-state’ health interventions after attributing his stay in ICU when he had Covid to his weight

The proposed ban on junk food adverts online will target food and drink products are high in fat, sugar and salt.

How a product is classified as HFSS has not been finalised yet.

Experts suggest the ‘traffic light’ system on food packaging could be used. The Government has also developed the Nutrient Profile Model.

Foods that could be considered HFSS under these methods could include:

Some of the items the Government plans to offer include, discounts on cinema or theme park tickets, shopping vouchers, vouchers for clothes and food, and gym passes.

But one leading commenter slammed the policy as a ‘waste of money’ and example of the continuing infiltration of the nanny-state into people’s lives.

A pilot version of the scheme will be launched in a yet-to-be-announced borough of England in January for six months before being rolled out to the rest of the nation.

Minister for Vaccines and Public Health Maggie Throup unveiled the scheme to MPs in the House of Commons today and said while all adults in the area chosen for the pilot would be able to those living in deprived areas will be specifically targeted.

With a nod to other No10 anti-obesity measures, such as the snack tax, Ms Throup said the Government also wanted to reward ‘good’ actions.

‘Obesity polices cannot be just about sticks, we must also reward healthy behaviours,’ she said.

The Government is spending £3million on the scheme and has awarded the contract to health technology company Headup.

It is the latest in a string of anti-obesity initiatives from No10 in recent months, as the Government seeks to trim the nation’s waistline and its impact on the budget.

Almost two-thirds of adults in England are classified as overweight or obese, with obesity related illness costing the NHS £6billion a year.

Obesity has also been linked with being more likely to become severely ill with Covid. Government data indicates nearly 8 per cent of critically ill Covid patients were morbidly obese, compared to 3 per cent of the general population.

Health Secretary, Sajid Javid claimed the Government was committed to improving people’s health and therefore the demands they placed on the NHS.

‘I want to ensure we’re doing as much as we can to tackle health disparities across the country, and this new pilot will pave the way for developing innovate ways to improve the lives of individuals, and also help to reduce strain on the NHS,’ he said.

‘This pilot is an excellent opportunity to find how best to inspire people to make small changes to their daily lives that will have a lasting positive impact on their health.’

But Christopher Snowdon, head of lifestyle economics for the think-tank Institute of Economic Affairs, told TalkRadio this morning that the scheme is another example of the ‘slippery slope’ of interfering in people’s lives.

‘It’s £3million which is about 4p per person so at least it’s not as expensive as some of the other nanny state projects,’ he said.

‘It’s not illiberal as such, it’s just a waste of £3million.’

Labour’s shadow public health minister Alex Norris said was also critical of the scheme arguing it failed to tackle the influence of poverty on obesity.

‘Whatever this pilot achieves, whatever the obesity strategy achieves they all get knocked into a cocked hat by the £20 a week cut to Universal Credit.

‘This will push millions of people into cheaper less healthy alternatives.’

But Alliance Lead Caroline Cerny added that the Government must fully implement restrictions on the food industry to improve people’s health.

‘It’s good to see the Government take further action to support people to be more physically active and eat more fruit and vegetables,’ she said.

‘As well as bringing in these incentives to support individual behaviour change, the Government must also incentivise the food industry to produce healthier products by introducing a levy to drive reformulation.’

In announcing the scheme, the Government pointed to evidence from Singapore and Canada of similar schemes demonstrating that financial incentives improved the rates of physical activity in populations.

The Government has said the new app will also have user privacy and security ‘at its core’.

Tackling obesity in Brits has been one of the Government’s pet projects ever since Prime Minister Boris Johnson attributed his weight to being sent to ICU when he contracted Covid in 2020.

Other plans being put forward include bans on daytime advertising of fatty foods and buy one get one free junk food offers.

These health initiatives, combined with the Government’s green policies such as the plastic packaging levy, will see an extra £160 slapped on their annual shopping bill, according to industry bodies.

Earlier this year Food and Drink Federation claimed the poorest Britons will be worst-hit by the policies, seeing the price of their yearly food bills rise by 11 per cent.

The Prime Minster — once a vocal critic of Government meddling in people’s eating habits — said he had a change of heart following his near-fatal brush with Covid.

Mr Johnson said being ‘too fat’ was the reason for his stint in intensive care with the virus last April.

A snack tax proposal was included in a new National Food Strategy, published by the PM’s food tsar, Henry Dimbleby, the founder of restaurant chain Leon.

Mr Dimbleby said the tax will encourage firms to reformulate their recipes or reduce portion sizes. He warned that unhealthy food was ‘putting an intolerable strain on the NHS’, with more than half of over-45s living with diet-related health conditions.

Poor diets contribute to 64,000 deaths every year in England and cost the economy an estimated £74billion, according to his report.

Kate Halliwell, chief scientific officer of the FDF, warned that policy would have other implications.

‘A salt and sugar tax will ultimately impact those families who are already struggling to make ends meet, by making food and drink more expensive,’ she said.

‘After many years of cost pressures, businesses in our sector are already operating on very tight margins, and any further costs would simply have to be passed on to the consumer in the form of higher food prices.’

HOW MUCH EXERCISE YOU NEED

To stay healthy, adults aged 19 to 64 should try to be active daily and should do:

A good rule is that 1 minute of vigorous activity provides the same health benefits as 2 minutes of moderate activity.

One way to do your recommended 150 minutes of weekly physical activity is to do 30 minutes on 5 days every week.

All adults should also break up long periods of sitting with light activity.