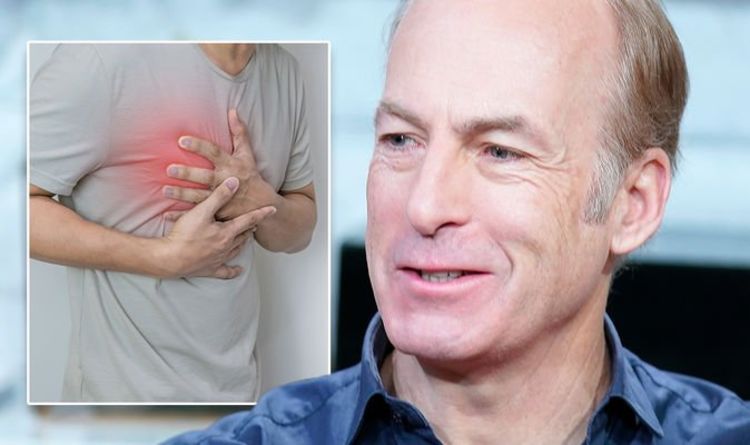 Bob Odenkirk took to Twitter to share the news saying: “I had a small heart attack. But I’m going to be OK, thanks to Rosa Estrada and the doctors who knew how to fix the blockage without surgery.” He also shared his gratitude to everyone saying: “Thank you. To my family and friends who have surrounded me this week. And for the outpouring of love from everyone who expressed concern and care for me. It’s overwhelming. But I feel the love and it means so much.”

The social media post ended with the actor saying he is going to take time to recover but promised fans he will “be back soon”.

Odenkirk was filming in New Mexico for the sixth and final season of the Breaking-bad spin-off which is scheduled to air in early 2022.

According to stats by the British Heart Foundation (BHF), heart and circulatory diseases cause around a quarter of all deaths in the UK.

The signs that might indicate someone is having or is going to have a heart attack are indicated by the NHS.

Chest pain or discomfort will most likely suddenly appear. This can feel like a pressure, squeezing or heaviness in your chest.

However severe chest pain can often be mistaken for indigestion.

The NHS state: “It’s the combination of symptoms that’s important in determining whether a person is having a heart attack and not the severity of chest pain.”

These are all signs indicated by the NHS and the BHF that individuals may experience.

These symptoms can either persist over a number of days or they can come on suddenly and unexpectedly.

Less common signs, but still ones to be aware of include a sudden feeling of anxiety, similar to a panic attack and excessive coughing and wheezing.

This is due to a build up of fluid in the lungs.

Symptoms may also differ between men and women.

In recent research, scientists have found that the most frequently reported symptoms in women who have experienced a heart attack was unusual fatigue, sleep disturbances, and anxiety.

And more than 80 percent of 515 women who were asked by the journal Circulation reported that they experienced at least one symptom for more than a month before the heart attack.

In comparison, men usually have heart attacks earlier in life compared to women.

They are more likely to experience chest pains, upper body pain and indigestion like stomach discomfort.

An individual with a family history of heart disease, high blood pressure, high blood cholesterol, obesity, or other risk factors, are at increased risk of having a heart attack.

If you think you might be having a heart attack, the first thing you must do is dial 999 immediately for an ambulance.

The BHF say next you should sit down, rest, take a 300mg aspirin if you have one within arms reach and then wait for the paramedics to arrive.