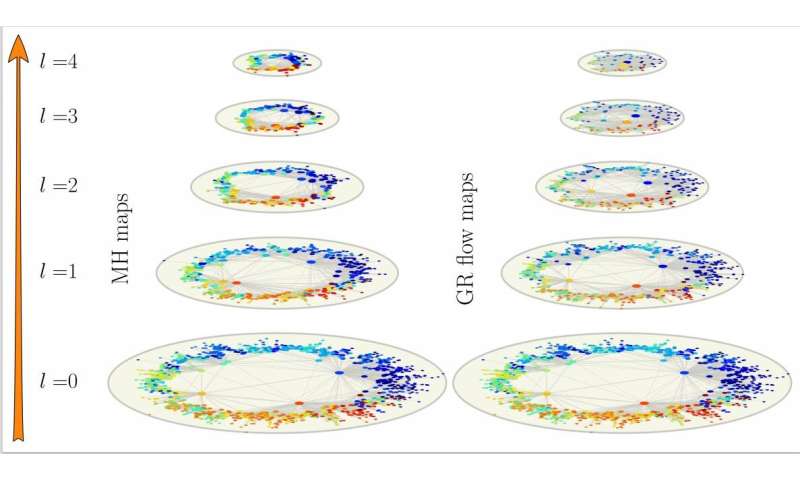 The architecture of the brain supports cognitive and behavioral functions and it is extremely complex with connections at multiple layers that interact with each other. However, research efforts are usually focused on a single spatial scale. In a study led by researchers of the Institute of Complex Systems of the University of Barcelona (UBICS), researchers studied the multiscale spatial organization of the brain and observed that, in a geometric network model, the layers at different resolutions are self-similar—that is, as we move away, the geometric and connectivity structure of the layers remains the same.

In order to carry out this study, researchers used two high-quality datasets with maps of neural connections, connectomes, of eighty-four healthy subjects with five anatomical resolutions for each. According to M. Àngels Serrano, ICREA researcher at UBICS, “the results show that brain connectivity at different scales is organized with the same principles that lead to a efficient decentralized communication.”

The structure of the human brain expands over a series of interrelated length scales which increase its complexity. “The self-similarity we determined as a pattern in the multiscale structure of the human connectome introduces the simplicity as an organizing principle,” notes Serrano. This means that underlying connectivity rules that explain this structure are independent from the observation scale, at least within the analyzed scales in this study, “that is, we do not need a specific set of rules for each scale,” concludes Serrano.

The model predicts observations through the application of a renormalization protocol. This method is based on a geometric network model that places the nodes in a hidden metric space, defining a map, so that both nodes are more likely to be connected. This type of model enables researchers to explain the universal features of real networks.

For every scale, there is a remarkable congruence between empirical observations and predictions provided by the model. The results show that the same rules explain the formation of short and long-range connections in the brain within the rank of length scales that cover the used datasets,” concludes the UB researcher.